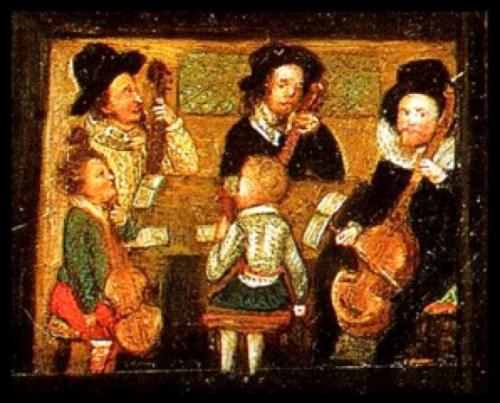 A unique image of an Elizabethan viol consort

There is only one picture of an Elizabethan viol consort and it is this tiny detail from a much bigger painting. The original image measures just 8.7 x 5.7 cm and shows an upper room in the house of Sir Henry Unton near Faringdon in Oxfordshire. Seated around a table we see five viol players, three gentlemen who face outwards from the picture (the one on the right is Sir Henry himself, as he is represented several times in the portrait as a whole). We know they are adults as they wear their hats indoors, as was the custom in Elizabethan society. There are also two boys or adolescents (hatless), one to the left-hand side and one with his back to us. You can just see the neck of the youngest player’s viol showing above his left shoulder. Each player has his own partbook in oblong format on the table in front of him, and plays a size of viol that seems to match his age, working from the smallest (treble) played by the younger boy, down to Sir Henry’s bass. The implication is that the players play a size of viol consistent with their own vocal range, and since much Elizabethan consort music was described as being ‘fit for voices or viols’ this makes perfect musical sense.

The portrait was commissioned by Sir Henry Unton’s widow Dorothy, presumably shortly after his death in 1596. It is unusual in representing in one narrative painting several different elements from Sir Henry’s life, from his birth, and education (at Oriel College, Oxford followed by a tour to visit Padua and Venice), through his military and diplomatic career (he served with forces led by the Earl of Leicester in the Low Countries and was later appointed ambassador to the French court), to his funeral procession in 1596. Sir Henry was clearly a man who enjoyed the arts. Not only is he shown playing the viol in consort, but in another scene in the painting he is shown presiding at the performance of a masque, where the dancers are accompanied by a broken concert (consisting of violin, flute and bass viol with plucked instruments: lute, cittern and bandora).

The painting is now in the National Portrait Gallery in London and can be investigated further through the NPG website:

Sir Henry Unton was also commemorated in music. In 1604 John Dowland published his famous Lachrimae collection ‘set forth for the Lute, Viols or Violons, in five parts’.  This included the beautifully melancholic pavan ‘Sir Henry Vmpton’s Funerall’, which can be heard on the Rose Consort of Viols’ CD Dowland: Consort Music and Songs played with lutenist Jacob Heringman. Dowland’s piece was in turn modelled on the earlier ‘The Funerals’ which  Antony Holborne published in 1599 in a set of five-part pieces ‘for Viols, Violins, or other Musicall Wind Instruments’. Both pieces are wonderful examples of the sombre style of the later Elizabethan period which is so well suited to the plangent sound of five viols. 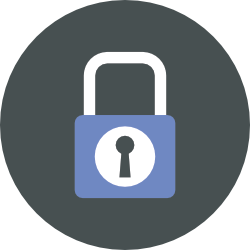